Dedicated to those friendly little brown floaty bits in cups of tea.

It seems that there are several schools of thought on this one. Some people say that floaty production is inhibited if they use a water filter. I have not tried this myself so I cannot vouch for its effectiveness.

If you can't afford a water filter and you make your tea in the cup or mug, don't leave the tea bag in for long and if you take milk in your tea, put the milk in as soon as possible. It seems that the floaty bits build up before you add the milk.

Recent experiments have shown that, in addition, the tea bag can be left in the cup for a moderate amount of time (not a long time) and you can still get floaty bits if you are not quick with the application of milk. Quite how you apply your milk is entirely up to you. It may be that evaporation plays a part in floaty bit formation. If you wait long enough before adding the milk, the floaty bits can actually form a complete skin across the top of your tea - quite an impressive sight if you ever get the chance to see it.

If you like strong tea and don't have a water filter, it's floaters for you, I'm afraid.

You can remove them from a freshly made cup of tea by lowering the back of a wooden spoon onto the surface of the tea. The floaty bits then stick to the spoon and come away as you lift the spoon away.

Well I'm afraid that there's absolutely no hope for you then.

Exbibit A - The Lesser Speckled Floaty 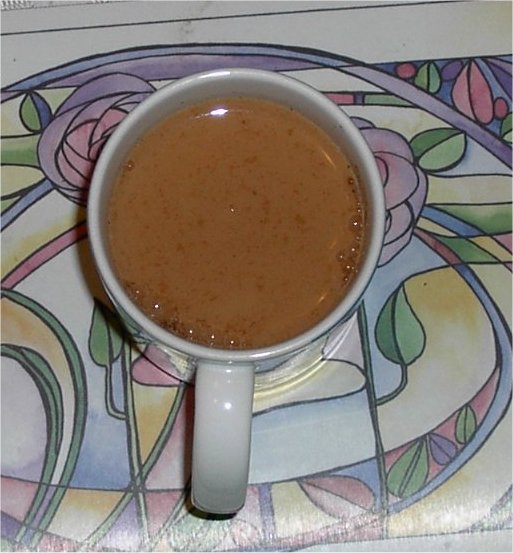 We are proud to be able to present to you this fine example of the lesser speckled floaty. One of the less common forms of floaty bits, this nevertheless fine example has the telltale signs of a teabag left in the water for rather a long time before the milk was added. Note that the actual number of floaty bits is rather high but the size of each floaty bit is small. This suggests a fairly promiscuous teabag but a lack of structural integrity, thus allowing the floaty bits to fragment into many smaller sections.

In this example, the bubbles form a nice finishing touch, adding an air of finesse.

"Since I've been using a water filter I've not been getting any brown floaty bits in my tea. It's a miracle. It's changed my life. I really don't know what I'd do without one now."
Mrs Harris, Blackpool

"Dear Sir,
I'll have you know that I like exceptionally strong tea and, as a rule, have no floaty bit problem, despite my affinity for making it in the mug. The trick is to wring out the teabag and remove it straight after putting the three-times boiled water in. (The water is boiled three times to get the familiar 'stop boiling the kettle and letting it go cold' scream from the wife)
Experiments conducted behind the Iron Curtain in the sixties which have recently come to light, show that floaty bit formation is a slow process, taking two to three minutes and requiring the presence of the teabag.
Thus teabag removal within the floaty bit free window, or'snezcha poppemov' as the Russian scientists dubbed it, prevents brown floaty bit formation.
Enjoy your floaty bit free tea!"
Professor B. Semihippy.
Secure wing,
West Cheam University of Tea and related leaf beverages.

"Dear Sir, do you have any information on the brown stinky bits that my colleagues and I find in our tea? I would be most grateful for any insight that you could give."
W. Gates, Redmond.

"So you think you got troubles with floaty bits already. Try to guage the right amount of time when dunking your digestives; don't let them get too soggy as they tend to drop off into your tea creating an excess of brown floaty bits. The correct way of dunking is to pull out while still firm and then administer biscuit orally. Don't hang around too long or you'll lose your lot in your tea. See?"
Noel Jones, a.k.a. Morgul, the Friendly Drelb.

"I sincerely hope that no idiocity comes to mind when a piece of flapjack smackhead decides to pool in its pile of rednecks.

Please. Do it for me."
Midjiddler.

"Dear Sir, in relation to the above research conducted by the repected Professor B. Semihippy, I must negate certain aspects of the presented theory. Personal research has found that formation of brown floaty bits occurs in seconds after application of boiled water, not the two to three minutes previously suggested. Thus 'snezcha poppemov' has been proven to be a significantly smaller time frame than first thought. Development of a time slowing/stopping device (a la Bernard's Watch) has begun with the sole purpose of preventing the formation of brown floaty bits. I would like to take this oppertunity to assure the public that brown floaty bits will soon be conquered. Never fear tea drinkers, the team is on it!

Yours faithfully and sincerely and belatedly,"

"Research was cut short on the Brown Floaty Bit problem due to extensive research into vodka and stomach pumps. It was later found that some of the original research was flawed due to watching the wrong hand on the stopwatch."

"I have found using an activated carbon filter combined with softened water has helped with the elimanation of the Brown Floaty Bit problem."

"I drink strong tea all the time and never have floaty bits! The key to my success? Keep stirring the tea bag - do not let it stop moving and you won't get any floaters. I try to spread the word wherever possible in the hope that everyone will be able to make tea like me and then one day, maybe, I will drink tea made by someone else!!"

"If you like strong tea and don't have a water filter, it's floaters for you, I'm afraid."

In my experience the art of making a good, strong cup from a tea bag is in the squeeze, NOT from the amount of time the bag is left in the water (good quality tea is also a must - Twinings or Taylor's being my preferences).

Tell me about your tips, tricks and further information on little brown floaty bits in tea (not the ones by the seaside).